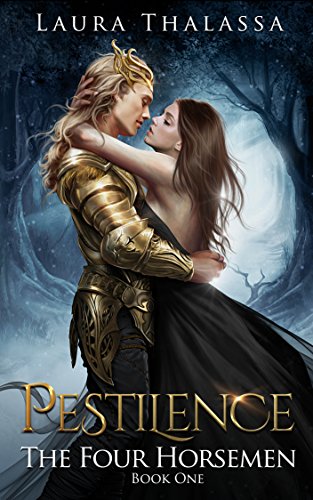 The Cover: I was skimming through kindle unlimited when I saw this cover and it immediately caught my eye. This cover is beautiful and I absolutely LOVE how it shows Pestilence and Sara; not a lot of books do that or their covers don’t match their books and I am so happy that the cover of Pestilence does this. It will probably be one of my favorite covers of 2018, A+.

When Pestilence comes for Sara Burn’s town, one thing is certain: everyone she knows and loves is marked for death. Unless, of course, the angelic-looking horseman is stopped, which is exactly what Sara has in mind when she shoots the unholy beast off his steed. Too bad no one told her Pestilence can’t be killed.

Now the horseman, very much alive and very pissed off, has taken her prisoner, and he’s eager to make her suffer. Only, the longer she’s with him, the more uncertain she is about his true feelings towards her … and hers towards him.
And now, well, Sara might still be able to save the world, but in order to do so, she’ll have to sacrifice her heart in the process. 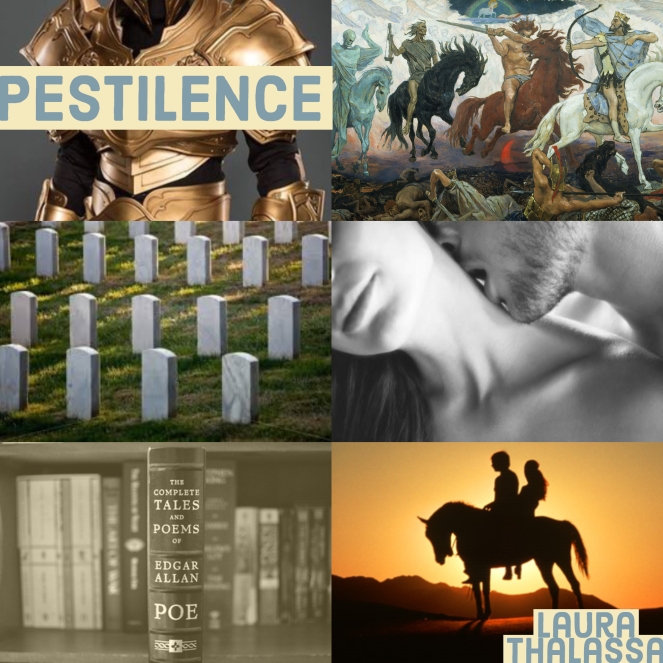 Overall thoughts: So when I found this book I was scrolling through the Kindle Unlimited section and I saw the cover and it immediately caught my eye. I am one of those people who are drawn to books by their cover, cliche and wrong I know but it’s how I’ve found some of the most wonderful books. I borrowed Pestilence from the Kindle Unlimited program and started to read. Honestly I had my doubts, it’s a fantasy book based on a woman falling in love with one of the four horsemen that are supposed to help end our world for crying out loud. But man…I was SO WRONG. Pestilence is one of the best romance, Mature YA, fantasy, new adult, science fiction and fantasy books of all year, if not of all time. Yes, I went there.

The world is ending and everyone is trying to find a way to stop it, which unfortunately means killing the being responsible for spreading the plague around the world. Sara Burns is a firefighter and just wants to help people in any way she can which leads her to staying behind to try and kill the Horseman as he travels into town. However when she tries to kill Pestilence, not everything goes to plan and Sara finds her a prisoner of one of the four horsemen of the apocalypse instead. But is there more to this harbinger than meets the eye? Sara is hell bent on finding out, willinging to do whatever it takes to save mankind and her family.

Pestilence and Sara start off as a bit irritating to read about because of their situation but as the book continues you just can’t help but swoon and root for them and their slow burning relationship. Sara is smart, is definitely not a damsel and has a sass that could knock the socks off anyone who tries to cut her down. Pestilence is frustratingly gorgeous and otherworldly, but I really loved watching transform from this conqueror and bringer of plague/hater of humans into this person growing into something wonderful but questioning everything around him. In a sense being a human being because lord knows our emotions make us question everything. As a couple I love Pestilence and Sara together and their attraction sizzles off the page.

Laura Thalassa is an amazing writer, she is funny and just has this beautiful way of transporting you into her book so effortlessly. Pestilence was enthralling from start to finish and I am super excited for the future books in this series!

Favorite Quotes: “I’m riding with one of the horsemen of the apocalypse. Holy shit. I’ve now got front row seats to the end of the world.” -Sara

“Anyone who tries to get close to us is doomed. You are safe Sara.”
“But I’m not. Not from him, and not from my own heart.” -Pestilence and Sara

“When you ignore me, I burn with restlessness; it feels as though  the sun has turned its back on the world. And when you smile at me–when you gaze at me like you can see my soul—I feel–I feel like I am lit on fire, like you have been called by God to raze my world.” -Pestilence. 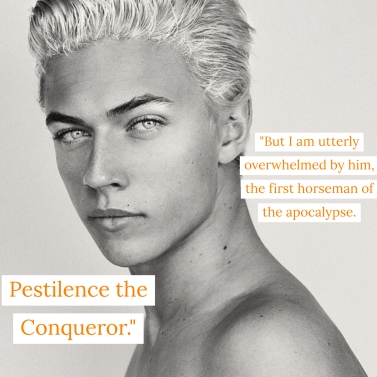 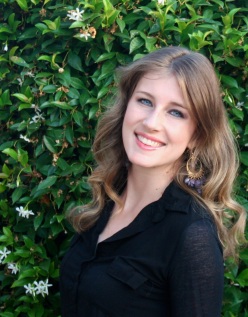 About the Author: Laura Thalassa Found in the forest when she was young, Laura Thalassa was raised by fairies, kidnapped by werewolves, and given over to vampires as repayment for a hundred year debt. She’s been brought back to life twice, and, with a single kiss, she woke her true love from eternal sleep. She now lives happily ever after with her undead prince in a castle in the woods. …or something like that anyway.

When not writing, Laura can be found scarfing down guacamole, hoarding chocolate for the apocalypse, or curled up on the couch with a good book. 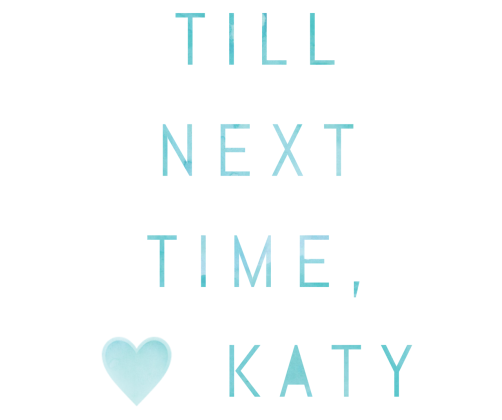 One thought on “Review: Pestilence The Four Horsemen by Laura Thalassa” 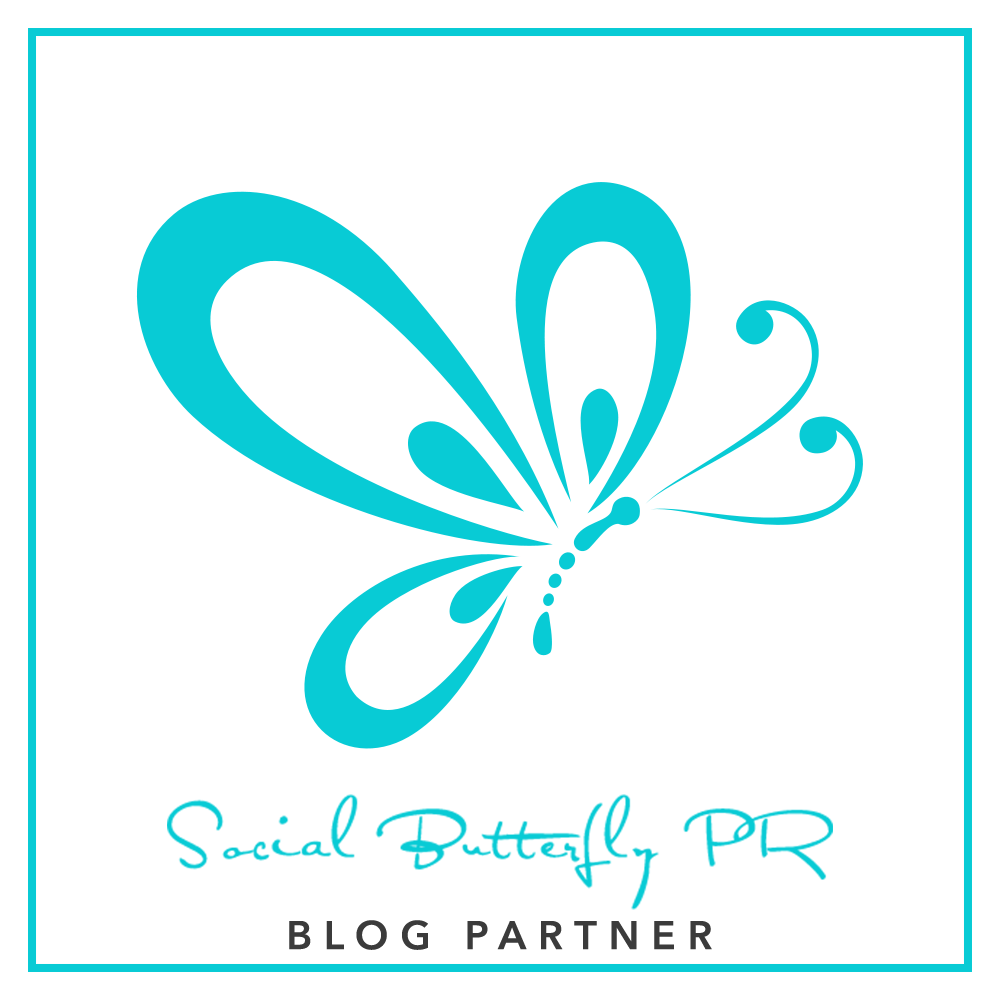